"Fucking kids!" Brad cursed as noise from the alley behind his home interrupted his nap. He went to the window, wearing only his boxers, to see what the ruckus was all about.

A group of about five young males, who looked like they should be graduating from high school but decided to waste their afternoon hanging out in an alley, were talking and laughing loudly. He looked closely. The rowdiest one was a big, brawny male, built like a linebacker, who gestured a lot and kept grabbing his crotch as he talked. His bulging genitals flopped about obscenely through the thin fabric. Brad seemed to recall that he lived a few blocs away, was about 19, and dropped out of college to live off his parents' wealth. He was a rude, obnoxious, spoilt brat. and Brad never liked him very much. He debated if he should chase them off or call the cops, and wondered if they would get back at him by vandalizing his home, or worse, if he did.

As he mulled over the decision, a smallish boy of about 14 began walking down the alley. He was about 5' tall, 90 lbs, and had a shock of red hair. As he got closer to the group of teens, they quieted down and focused their attention on him. The burly teen, who at about 6'5" and at least 280 lbs, was four times bigger than the redhead, stood with his arms folded across his broad chest blocking the kid's way.

The bigger boy began making comments and jokes about gingers, and his group laughed derisively at the little redhead. The boy looked down, and remained quiet as the beefy bully continued insulting him. Deciding to torment the tiny redhead more, the bully grabbed him in a headlock and began dragging him around the alley as his posse cheered him on.

Brad's anger began to boil. No one should have to be bullied like that. He decided to confront them but suddenly, the ginger began to fight back. He began driving uppercuts between the hefty bully's thick legs. Stunned by the barrage of punches that blasted his bulging balls, the bully stopped dead in his tracks. The ginger kid struggled, and managed to free himself from his weakened bully's grip. The bigger kid doubled over in agony, clutching his aching balls and groaning deeply. Instead of running away, the ginger kid stood his ground, put up his fists and prepared to fight.

Brad and the gang of teen boys were utterly stunned. The pint-sized redhead had turned the tables on his much larger bully. His dangling testicles and pride wounded, the burly teen decided he would try to beat up the angry redhead to redeem himself.

"You're dead!" he yelled as he rushed at the boy, his ham-like fists flailing wildly.

The ginger kid methodically avoided every clumsy punch from his wannabe bully. The hulking teen's clumsy punches only connected with empty air. As he fatigued, the ginger kid launched a savage but methodical counterattack. First came a wave of punches that slammed into the bigger teen's midsection, vulnerable sides, and rib cage. The hefty teen was weakened further by the pain, and could barely muster enough stamina to fight back and began folding up to protect his trunk. Now that his overgrown bully had been brought down to his height, the ginger boy fired off a round of punches to his unprotected face. Tiny but powerful fists slammed into his pudgy face, turning it into a red swollen, tear-stained mess. Completely stunned, the bully brought his arms up to protect his face. He stood no chance against his supposed victim. The ginger sent a kick that slammed into his vulnerable aching balls, the fabric of his shorts bunched up around the sailing foot, confirming that it hit its intended target and drawing a loud screech from the bully. As the barrel-chested teen doubled over in agony, the ginger kid smacked him in the face with a vicious uppercut. The hulking bully raised his arms to protect his face, leaving his groin unguarded yet again.

The redheaded spitfire then grabbed the oversized teen's brawny arms and drove his knee into his cum-filled balls repeatedly. Brad counted at least 5 strikes to the bully's bobbing balls. The husky teen let out a pitiful moan as he sank to his knees, dazed and in utter agony. His so-called friends ran away, terrified by how the little ginger kid had so badly beaten their "leader".

The ginger kid grabbed a handful of his whimpering bully's hair, glared into his fearful eyes, and ordered him to take off his clothes. The burly teen hesitated, earning a few slaps to his pudgy reddened cheeks. He stood up and immediately obeyed. It was a sight to behold. The ginger kid stood there, his hands on his hips, glaring at his bully who was in complete terror and peeled off every piece of clothing except his boxers.

His pale muscular but slightly flabby body on full display, the hulking bully sobbed as he hung his head in shame. "I said take off everything!" the ginger kid commanded. The bully slowly dropped his underwear, exposing his thick bush of pubes, and dangling balls which had swollen to the size and color of ripe apples.

The ginger kid then made the bulky teen stand facing a wall. The bully sobbed uncontrollably, begging for mercy from the tiny kid he wanted to torment minutes earlier.

Without warning, the cruel ginger reached between the hulking bully's thick pasty buttcheeks and grabbed his bloated balls, drawing a scream of shock and pain from the teen. He yanked the bully's pendulous balls backwards between his ass-cheeks with both hands, crushing the tenderized organs without an ounce of pity. The bully wailed hysterically as the pint-sized ginger mashed his manhood like lumps of clay in his hands.

Brad realized that his cock was hard as a rock. He was extremely aroused by the spectacle of the much smaller boy beating and humiliating his much larger bully. As the sadistic ginger kid crushed his bully's gonads to a pulp, Brad stroked his cock furiously. The pathetic squeals and whining noises the brawny teen emitted in response to his big boy balls being busted soon made Brad unload his jizz. Glob after glob of spunk sprayed from his throbbing cock. Brad's legs turned to jelly from the ecstasy and he dropped to one knee, panting and enjoying the afterglow of his unbelievable orgasm.

The ginger kid released his bully's bruised and battered balls, and the burly teen immediately dropped to the ground like a sack of wet cement. He curled up into the fetal position, sobbing hysterically and nursing his shattered manhood. The ginger kid picked up the bully's clothes, and took them home with him, leaving the big brawny bully naked and utterly humiliated in the alley.
Posted by Darrel L at 9:28 PM 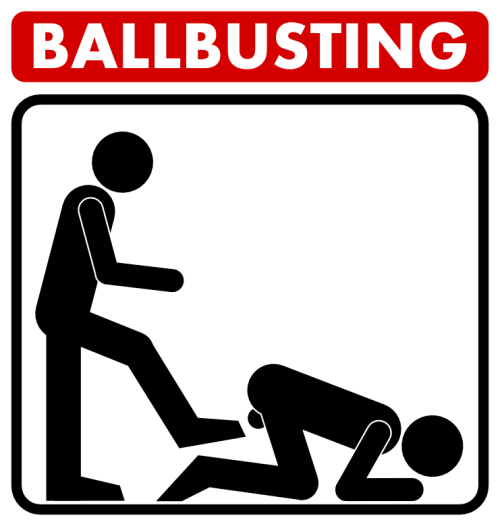